Greetings everyone! Here are upcoming repacks I am working on:

Crack not working for you? Try applying the crack linked here after installing the game – this should fix some crashes!

About This Game
Haydee II, like its predecessor, is a game about a female protagonist locked in a strange complex with no clue of what’s going on or how to get out. It is another maze of 6 themed sections and 160 rooms filled with enemies, puzzles and hidden items, where your only friends are your gun, your wits and item management. It is you against the challenge. You either give up or accept it. The choice is yours.

This game will not give you:

– Any clue or direction from the narrator

But it will give you mods and an editor. Good luck with your journey!
Hardware Requirements
Minimum:

Welcome to the World of Arkanys

On a day like any other, a young boy returns home to find it in ruins and his parents, gone. Armed with courage and driven by the pain of his loss, he sets out on a journey to uncover the truth behind his family’s disappearance… But what he discovers will forever change the World of Arkanys…

Legends of Ethernal is a 2D single-player action adventure game where you need to explore beautiful hand-crafted environments, solve clever puzzles and battle challenging creatures to uncover the truth about your parents’ disappearance.

About This Game
For Max Payne, the tragedies that took his loved ones years ago are wounds that refuse to heal. No longer a cop, close to washed up and addicted to pain killers, Max takes a job in São Paulo, Brazil, protecting the family of wealthy real estate mogul Rodrigo Branco, in an effort to finally escape his troubled past. But as events spiral out of his control, Max Payne finds himself alone on the streets of an unfamiliar city, desperately searching for the truth and fighting for a way out.

About This Game
Feud: Wild West Tactics is a turn based game all about gun blazing, shotgun blasting, knife stabbing and dynamite throwing action in the Wild West. Centered on the famous Hatfield and McCoy feud you’ll be able to play special storylines from each side with sets of unique characters, each with a ton of personality and grit! Learning how to use your posse effectively against the dangers of the world is the core of the game. Only the hardiest gunslingers can expect to go the distance and survive!

When you get through with the story, you can try your hand at empire building in Western Saga mode. Based on traditional 4x strategy games, you’ll be able to capture resources on the map, research numerous upgrades, explore, investigate events, hold up wagon trains, hunt down wanted men, and most importantly drive the other enemy families off your land for good!
Hardware Requirements
Minimum:

Storage: 12 GB available space
Mature Content Warning
This game may contain content not appropriate for all ages. Some attacks may involve characters getting shot, stabbed or killed. Red blood sometimes appears when characters are injured or killed either during the impact as well as pools on the environment.

About This Game
Colony Siege combines the best of RTS and tower defense, including base building, mazing, and unit physics. Use shockwaves and spring traps to propel enemies into cliffs, lava, and other hazards. Build mechs, tanks, and other mobile units. Decimate massed enemies with air, missile, and orbital strikes. Expansive, non-linear campaign supports single player and 2 player online co-op.

Whether fighting the Xenos or the Riven, no colony building is safe from attack. While protecting the colony Citadel is your primary objective, the enemy will not discriminate when it comes to attacking your colony.

Defend against the relentless biomechanical xeno swarm as well as the corrupted Riven that were once human. Both enemy factions behave differently and require different tactics.

Defend with powerful towers that automatically form walls when placed near each other. Use unique traps to slow, impale, burn, or bombard the enemy.

Experience dozens of intense missions from a starmap with branching paths. Press your advantage or repeat previous missions for extra cash.

The entire campaign is cooperative from the very first mission to the last. Consolidate forces with a friend or combine different tactics.

Earn money from completing mission primary and bonus objectives, and spend it on persistent upgrades, new weapons, and different towers, traps, units, and strikes. Unlock powerful perks to buffer your weaknesses or bolster your advantages.

About This Game
Hearts of Iron III lets you play the most engaging conflict in world history, World War 2, on all fronts as any country and through multiple different scenarios. Guide your nation to glory between 1936 and 1948 and wage war, conduct diplomacy and build your industry in the most detailed World War 2 game ever made.
Hardware Requirements
Operating System: Microsoft® Windows® 2000/XP/Vista

About This Game
Welcome to the vivid, vibrant, and violent post-apocalypse.

The Dreadlands await!Dreadlands is a shared world, turn-based tactical, skirmish game set in an unforgiving environment where life and death revolves around the constant struggle for Glow, a resource as valuable as it’s enigmatic.

Explore the wondrously diverse regions of the Dreadlands, overcoming the wealth of challenges provided by the treacherous terrain, voracious Beastlife and trigger happy locals.

Exploring the Dreadlands will be a diverse and dangerous trek. The region resembles a patchwork of contracting biomes, a strange brew definitely not concocted through the methodical work of mother nature.

There’s an abundance of jaw-dropping sights to see and gruesome things to kill, as you travel across grasslands, lush swamp-jungle hybrids, mountains, desert plains and contaminated zones of utter devastation.

The Dreadlands is notorious as a unique and wondrously weird place, which is quite a feat, considering the post-apocalyptic world is no stranger to otherworldly strangeness!
Hardware Requirements
Minimum:

About This Game
Max Payne 2: The Fall of Max Payne is a violent, film-noir love story. Dark, tragic and intense, the in-depth story is a thrill-ride of shocking twists and revelations.

His life in ruins, Max Payne finds himself back in the NYPD. During a routine murder investigation he runs into Mona Sax, a woman he thought dead, a femme fatale murder suspect. She holds the keys to the questions that haunt him. But nothing is simple in the dark and tragic night of New York City. An army of underworld thugs stands between Max and the answers he seeks. His journey deeper into his own personal hell continues.

Max Payne 2: The Fall of Max Payne delivers an intense gameplay experience. It features fierce, yet stylish action sequences and the slow-motion gunplay that has become synonymous with the Max Payne series.
Hardware Requirements
Minimum:

About This Game
With science as your super power, charge up your coils and zap into action! Tesla Force is a rogue-lite top-down shooter featuring endless procedural gameplay with tentacle splitting action. Play as Tesla, Curie, Lovecraft and Shelley and blast the cosmic horror back into the galactic abyss! 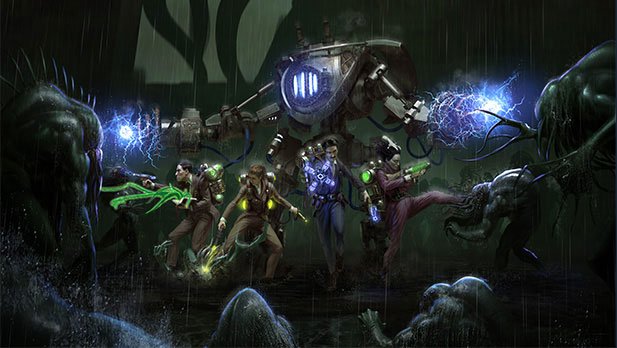